Football Manager Touch 2016 Apk is another FM popular highly costing game which h been recently introduced by SEGA FM developers. This version of FM is introduced with some new features especially including the touch features.

Football Manager Touch 2016 is the most comprehensive FM game which includes a massive 139 different leagues with special controls and skills.

FM is always popular for its good controls and great options for managing teams, and this new version of FM had taken these features to the next level. The new version is here with more clear and streamlined view, controls for the managers are also upgraded and now they can manage their teams for different tournaments and leagues better than ever.

Being a replica of its sister game FM Mobile 2016 Apk, the touch version is specially desinged and configured for tablets and high resolution android devices to give them a more suitable user experience.

Another appreciable feature of FM is that it’s all version are interconnected, means if you have settled up your team and Football Manager 2015 and want to continue with the same team and players in another version of FM so you can do that easily by just sync the two versions.

To Install the game on your smart device, you must need to have an Android version of 4.4 or above with a free storage of 800 MBs. 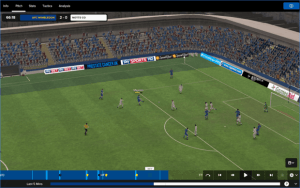